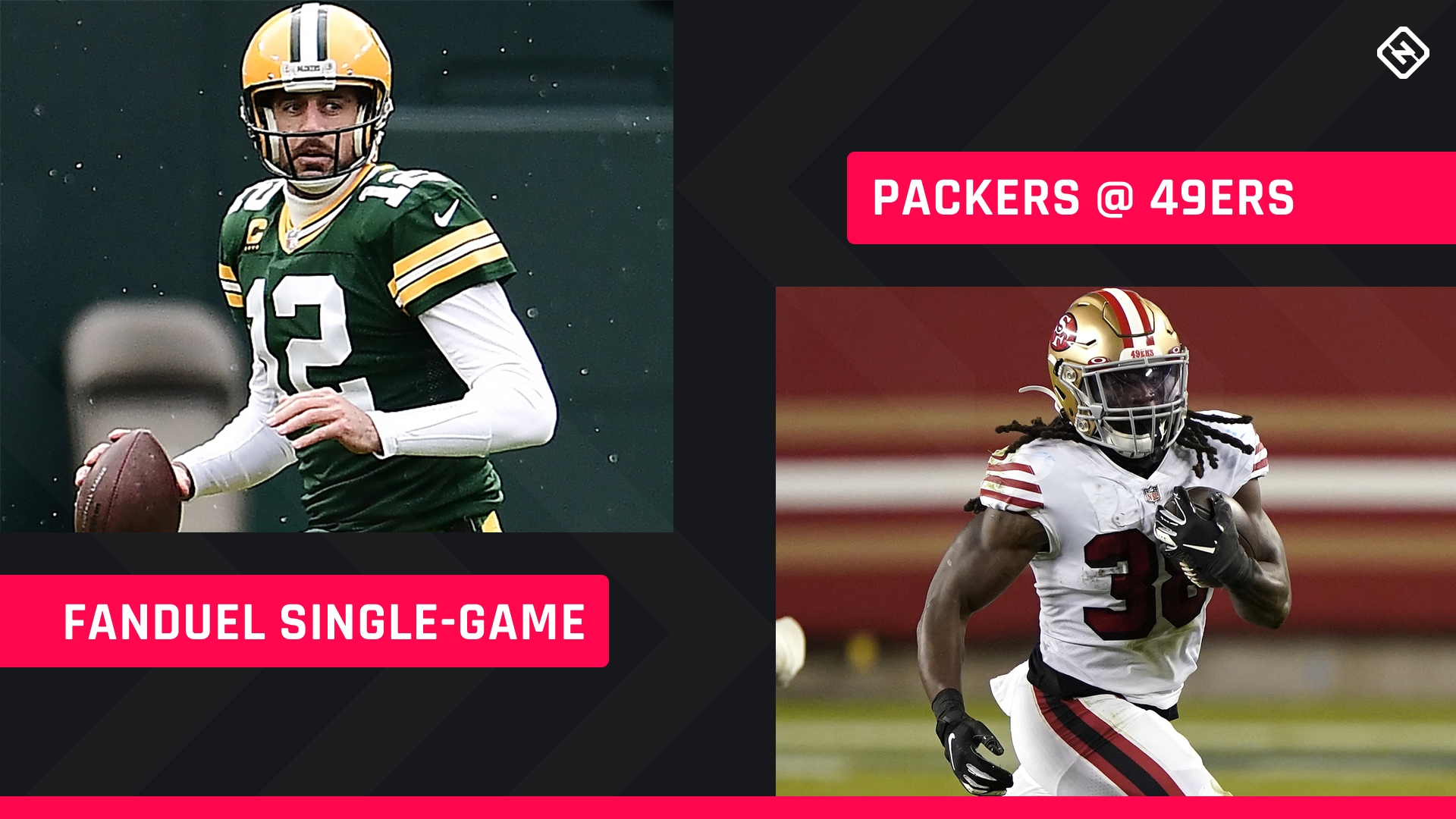 The Packers and the 49ers are facing off on Thursday Night Football in Week 9, but neither squad will be at full strength. The 49ers will be without Jimmy Garoppolo, Raheem Mostert, Tevin Coleman, Jeff Wilson Jr., George Kittle, and Deebo Samuel, while the Packers will be missing Jamaal Williams, AJ Dillon, and possibly, Aaron Jones and Allen Lazard. These injuries will create opportunities for NFL DFS players to get creative with their lineups and spend up for top-tier players while targeting some sleepers in high-volume situations. Our FanDuel Single-game lineup will certainly be taking that strategy and will include the two highest-priced players on the slate.

Because of all the injuries, there are only a few MVP options that make sense. We almost went contrarian with our top choice, but ultimately we opted for the safest player, as we’re taking on additional risk with one of our sleeper picks. We’re leaving $ 1K on the board right now because of the lack of worthwhile high-salary options, and that gives us a bit of wiggle room in case a player dealing with an injury is surprisingly active.

The best MVP options for this lineup are Davante Adams and Rodgers. That said, because FanDuel is a half-point PPR format and not full, we’ll go with Rodgers. After losing to the Vikings despite putting up nearly 300 yards and three TDs, Rodgers knows he needs to do a lot to carry the Packers. He’s totaled at least 22.54 FanDuel points in all but two games this year and has two-plus TDs in all but one outing. Rodgers will put up his usual solid stats, but it’s also worth noting that the Packers are hurting at RB with Jamaal Williams and AJ Dillon on the COVID list and Aaron Jones (calf) questionable for the game. With only Dexter Williams and Tyler Ervin around, Rodgers may take matters into his own hands. For that reason, we’ll trust him as the captain since his floor is higher than Adams and his ceiling is just as high (if not, higher).

Rodgers is averaging 22.75 FD points per game this year; Adams is averaging 22.74. He has been Rodgers’ preferred target when on the field, and in his past two games, he has caught 20 passes for 249 yards and a whopping five TDs. The 49ers have done well limiting yardage to receivers this year, but their nine receiving TDs allowed ranks tied for the ninth most in the NFL. Rodgers will continue to heavily target Adams in a pass-heavy game script, and Adams could put up massive numbers, especially if Allen Lazard (core) can’t return for this game.

Dalvin Cook totaled 32 touches, 226 yards, and four TDs against the Packers’ bottom-ranked run defense in Week 8. Green Bay has allowed 14 total TDs to RBs, good for the most in the NFL, and it has given up the most FD points per game to the position (32.4). The 49ers may be shorthanded at RB with Raheem Mostert (ankle), Jeff Wilson Jr. (ankle), and Tevin Coleman (knee) out and Jerick McKinnon dealing with “tired legs,” but Hasty has proven to be a solid starting option. He runs behind a strong offensive line and has averaged 8.7 FD points in his past two outings despite garnering just 11.5 touches per game. With a larger workload against a worse defense, Hasty could have a big day. He’s even worth considering as a contrarian MVP option, but for now, he’s a perfect mid-tier value for this lineup.

The 49ers are set to be without their top two receiving weapons, George Kittle (foot) and Deebo Samuel (hamstring), on Thursday night. That will leave Aiyuk as the top receiver, and he should do well in that role. In his past two games, Aiyuk has seen 18 targets, grabbed 14 catches, and racked up 206 yards and a TD. Granted, his score came against a weak Seahawks pass defense, but the yardage floor is there for him. The Packers have allowed the second-fewest yards to receivers this year, but the 49ers like to get the ball into the hands of their playmakers and let them do damage after the catch. They may have trouble containing Aiyuk, so feel free to trust him given his volume and ceiling.

If the Packers are without their top three RBs against the 49ers, Ervin and Dexter Williams will be in line for bigger roles, but Ervin is the better DFS play. Erivn has been used in jet motion as a receiver at times for the Packers and could catch quite a few passes out of the backfield if the Packers look to get their run game going with short dump-off passes to the outside. Either way, Ervin should be in for some touches, and in a matchup against the 49ers’ top-ranked run defense (15.7 FD FPPG allowed to RBs), we trust him more than Williams because of his ability as a receiver out of the backfield.