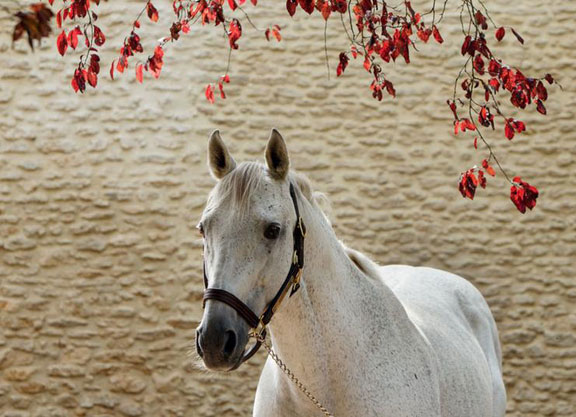 World champion miler and leading French sire Slickly (Fr) (Linamix {Fr}-Slipstream Queen, by Conquistador Cielo) has died aged 25 at Haras du Logis. The grey had been pensioned from stud duties in 2019, having stood at stud at Logis since he retired to stud in 2003.

Julian Ince, who has managed Slickly’s stud career, said, ‘Slickly has been a wonderful horse to have at Logis, and had a very loyal following among French breeders. He was the perfect sire for the French ‘primes’–his stock could win as early juveniles and still be going strong as 6- or 7-year-olds, much as he was himself. He reliably transmitted his will to win. He was quite white in his old age, with plenty of lumps and bumps, but he was always happy to see a friendly face, and it was a sad day when we finally had to let him go.”

Bred by Jean-Luc Lagardere, Slickly was trained initially by Andre Fabre for Godolphin to win the G3 Prix la Rochette at two and the G2 Prix Noailles and G1 Grand Prix de Paris at three, in addition to finishing second to Dubai Millennium in the G1 Prix Jacques le Marois. Transferred to Saeed bin Suroor at four, Slickly added the G3 La Coupe and G2 Prix Dollar, and he was at his best at five when winning the G1 Prix du Moulin de Longchamp and the G1 Premio Vittorio di Capua. Slickly made just one start at six, defending his Premio Vittorio di Capua title.

Slickly’s 17 stakes winners were headed by his four-time Group 1 winner Meandre (Fr), who like his sire won the Grand Prix de Paris. At his peak, 17% of Slickly’s offspring won at least €100,000 in prize money and French premiums. Slickly’s line will continue through the likes of his Group 1 performer Gris de Gris (Fr), who is doing well as a jumps sire, while his broodmare daughters include the Group 1 producer Maka (Fr). Slickly’s sister Sichilla (Ire) is the dam of French champion sire Siyouni (Fr).