Aryna Sablanka is one of the hottest players on the WTA Tour having won two consecutive titles to close out last season (Ostrava & Linz) while opening the current season with a title in Abu Dhabi.

The twenty-two-year-old from Belarus is at a career-high ranking of #7. Despite having amassed an impressive haul of nine titles in her young career, she has yet to progress past the fourth round at a grand slam (US Open 2018).

Her opponent in today’s third-round encounter is the twenty-year-old American, Ann Li. Li has been making headlines too, having defeated the #31 seed Zhang Shuai and former world #11 Alize Cornet, in straight sets in the previous two rounds. 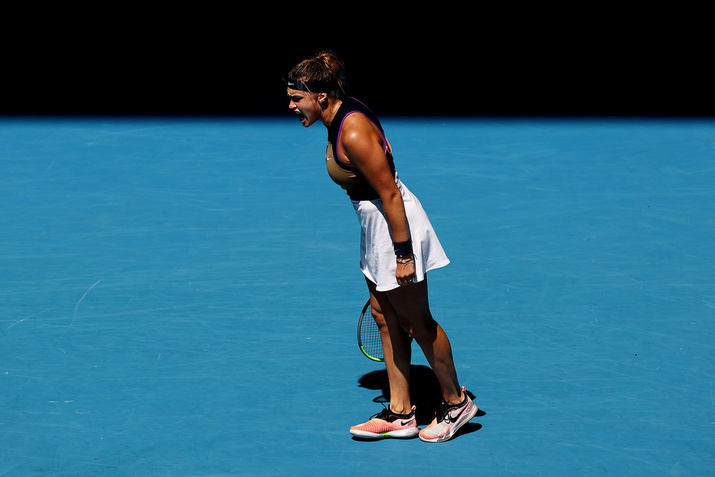 Li is undefeated this season having reached the final at the Grampians Trophy last week, posting wins over fellow American and world #24, Jen Brady, #36 Veronika Kudermetova, and former world #21, Sorana Cirstea. As a result of this impressive run in Melbourne, Li has achieved a career-high ranking of #69.

Sabalenka continued to serve big and unload on the forehand as she once again held at love for 2-2. Li soon faced triple break point as her opponent ripped the ball off both wings and dropped serve when she netted a forehand.

Sabalenka had an arduous time consolidating the break, letting a 40-0 lead slip away with a double fault and two forehand errors but eventually held with well-placed serves.

Li went down 0-30 after Sabalenka hit a massive forehand down the line and a forehand crosscourt on consecutive points but recovered and gained the advantage with a body serve and a spectacular inside-out forehand on game point for 3-4.

Sabalenka, serving with new balls, held to 15 for 5-3 with an extraordinary crosscourt backhand. Li, serving to stay in the set, was unable to neutralize her opponent’s power and dropped serve and the set 3-6.

There were very few extended rallies as the world #7 opened up the court with her exceptional serving and penetrating groundstrokes. Li, more often than not, found herself pulled out wide and at the mercy of her opponent.

Sabalenka served first in the second at held to 30, striking two consecutive aces, the second on game point. Li not only had difficulty with her opponent’s pace of shot but the pace of the match. In a blink of an eye, she faced triple break point and dumped serve when Sabalenka crushed a forehand down the line on the return. Sabalenka, consolidated the break hitting two more aces and two forehand winners. Li came close to going down a double break but competed admirably, saving two break points for 1-3.

Sabalenka had troubles of her own as she donated another double fault and three groundstroke errors. After three deuce and four break points, the Belarusian dug deep and held for 4-1 with two additional aces and three winners off the ground.

Time was running out for the young American. She faced triple break point as Sabalenka continued to rip the forehand both crosscourt and down the line. Following two consecutive errors off the forehand, Li dropped serve affording her opponent the opportunity to serve for the match.

Although she donated her fourth double fault, Aryna Sabalenka reached the fourth round at the Australian Open for the first time. In exactly 60 minutes, she dispatched a composed and highly competitive opponent 6-3, 6-1. She served superbly hitting 7 aces to 4 double faults and won 78% of first serve and 71% of second serve points.

Serena Williams awaits her in the following round with a coveted spot in the Australian Open quarterfinals on the line.