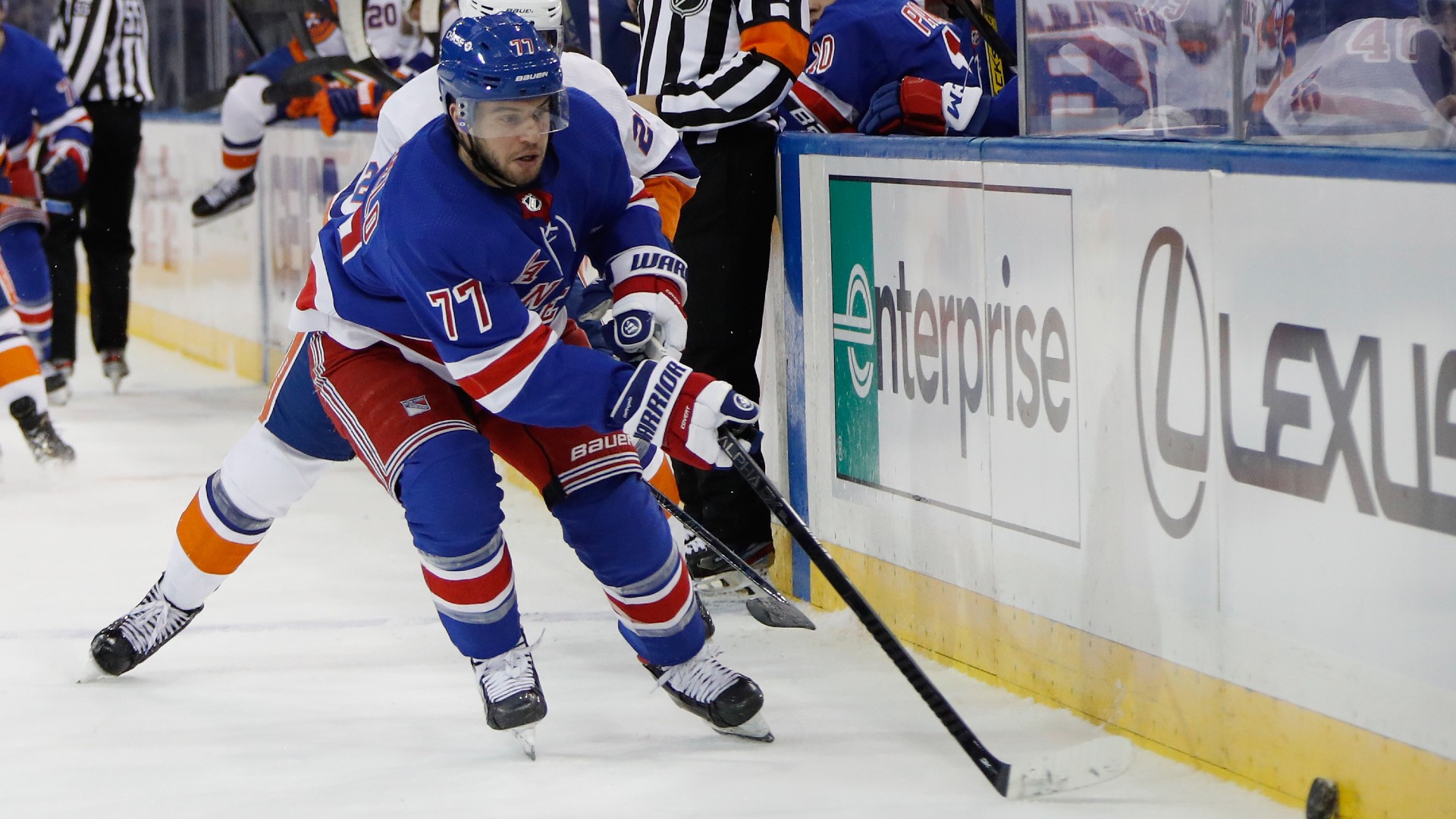 Tony DeAngelo’s tenure in New York is officially over.

“Yes, he has played his last game for the Rangers,” general manager Jeff Gorton confirmed prior to New York hosting the Penguins on Monday night.

The controversial defenseman was placed on waivers Sunday afternoon (he cleared Monday) following an incident after the team’s 5-4 overtime loss Saturday to Pittsburgh. Neither Gorton nor team president John Davidson would confirm exactly what happened, but numerous reports indicated DeAngelo and netminder Alexander Georgiev got into a physical altercation outside the locker room.

DeAngelo is now on the Rangers’ taxi squad but will not be around the team.

What happened Saturday was the final straw for the organization.

“It’s tough. I generally like Tony,” said head coach David Quinn, who added that he texted with DeAngelo on Sunday night but would not elaborate on what was said. “It’s just tough. But it is sports, and it’s unfortunate. You’ve got to move forward and that’s not only as a staff but as a team and an organization. That’s what we have to do whenever a player leaves this organization, regardless of how he leaves.”

Being waived should not have come as a surprise to DeAngelo. Gorton said he warned DeAngelo at the beginning of the season that there could not be any more issues. The warning came after DeAngelo showed unhappiness over being scratched for the team’s second game. Quinn sat the defenseman after he took an undisciplined unsportsmanlike conduct penalty in the opener.

“I made that statement to him, something happened and I pretty much have to stay true to my word here and the organization’s word that it was time to move on,” said Gorton. “That’s basically what it is. We feel like moving on from Tony is the right thing to do. It’s about winning, and we feel like this was a move that we had to make in our room to put us on the path to winning.”

While it’s the right move for the organization now, it’s also a move that had been long overdue. Sure, the 25-year-old DeAngelo had a standout season in 2019-20 when he collected 53 points in 68 games, but the New Jersey native also has a long rap sheet of misconduct.

He was suspended three times in the OHL — once for abuse of officials and twice for violating the league’s policy of keeping “homophobic, racist and sexist language out of the game.”

Despite that, he was drafted 19th overall by the Lightning in 2014. Then-Tampa Bay GM Steve Yzerman said he believed DeAngelo could “change and grow up.” The Lightning traded him in 2016 to the Coyotes before Arizona sent him to New York a year later.

“We did a lot of research, talked to a lot of people about Tony prior to acquiring him,” noted Gorton. “Everything went into it when we did that. We did our homework, we felt comfortable.”

DeAngelo also has been vocal on social media with his political views (he tweeted “what happened to COVID-19?” after the 2020 presidential election) and has criticized and argued with fans (he challenged one to a fight).

Davidson said the defenseman’s social media presence (DeAngelo is off Twitter now) did not factor into the decision to sever ties.

“There’s a fine line obviously with social media, but there’s also a freedom of speech, and we certainly watch what our players say and do on social media,” said Davidson, who added he had a chat with DeAngelo at one point to discuss life and his future. “It’s a difficult thing to police, but that had nothing to do with this.”

There have also been rumors regarding DeAngelo and his teammates beyond what occurred Saturday night. Quinn, who spoke after Gorton and Davidson did, commented that DeAngelo was well-liked by his teammates and coaches. Davidson, before taking any questions, made a statement regarding a blog report that DeAngelo took rookie defenseman K’Andre Miller’s first NHL goal puck.

“That is 100 percent false. There is no truth to it whatsoever,” Davidson said. He also indicated the pair do not have any issues and that the training staff has the puck. “For people to write things like that, other people to digest it, it’s just wrong. It’s sad, actually.”

Gorton said that while the team is moving on, it still wants to find a place for DeAngelo to continue his career. The Rangers signed him to a two-year, $ 9.6 million contract in October when he was a restricted free agent. The organization finding a trade partner for someone with a $ 4.8 million cap hit and attitude issues is unlikely. In just seven years since being drafted, DeAngelo would be on his fourth organization and it’s doubtful he could be considered a reclamation project at this point.

“It’s about a team here, we’re building a team,” added Gorton. “We’re trying to become a team as quickly as we can and I just felt like this was becoming a distraction and we’re trying to stay true to our word here. We told a player that enough is enough. Let’s move on.”