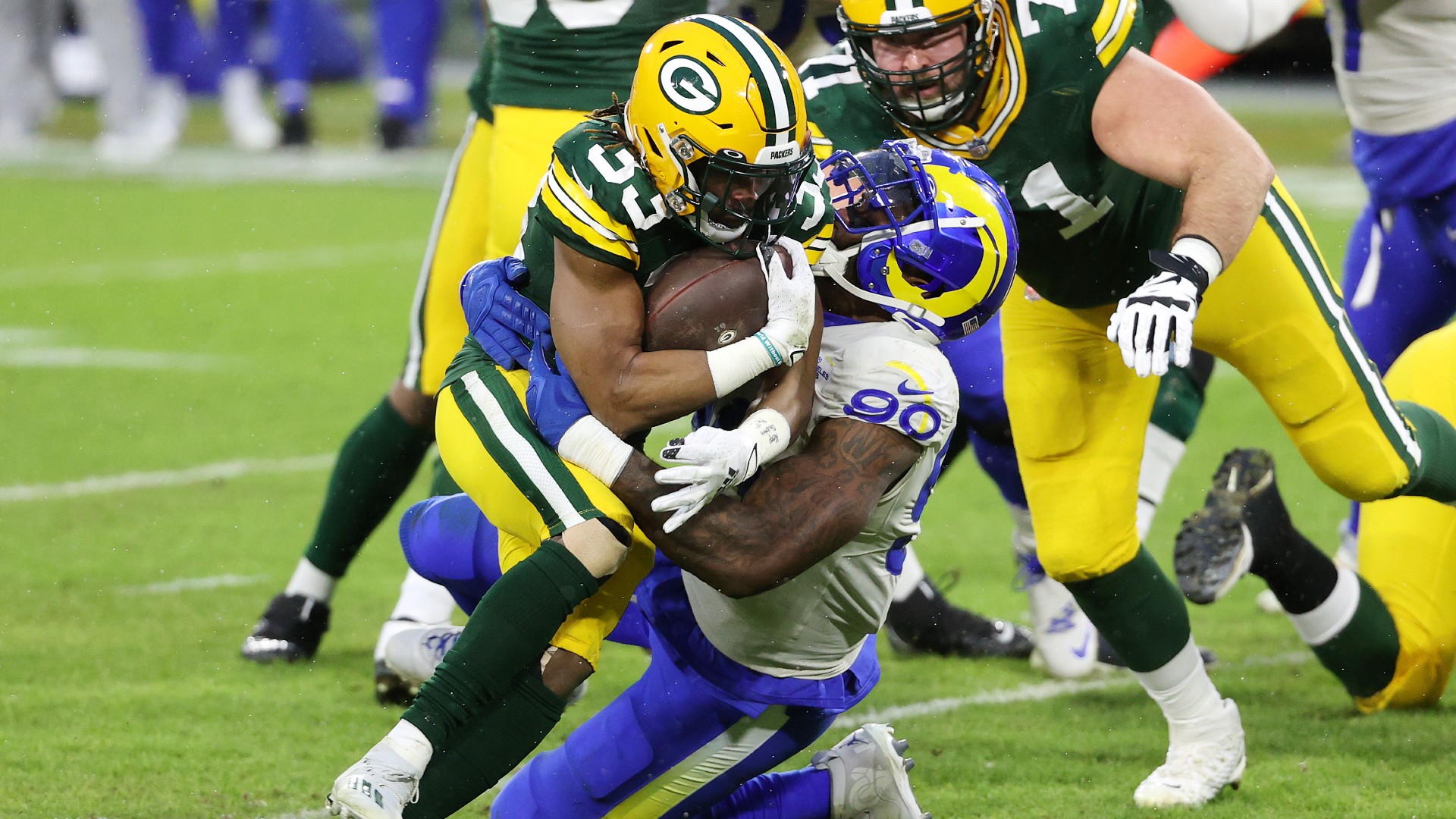 Aaron Rodgers will play in his fifth NFC championship game next weekend, but it will be his first at Lambeau Field.

And that’s not even the biggest advantage he and the Packers — who defeated the Rams 32-18 in the NFC divisional round Saturday in Green Bay — will have.

Lambeau does provide an edge. Rodgers (23-of-36 passing, 296 yards, two touchdowns) is playing like a soon-to-be three-time NFL MVP. Davante Adams had nine catches for 66 yards and a touchdown in his much-anticipated matchup with Rams cornerback Jalen Ramsey. The Packers’ offense just shredded the league’s best defense for 484 total yards.

But the biggest X-factor in the Packers reaching the Super Bowl for the first time since the 2011 game, a victory over the Steelers, will be their three-headed rushing attack of Aaron Jones, Jamaal Williams and A.J. Dillon.The trio’s performance Saturday helped set up Green Bay to make that return, and they’ll need to continue that production next Sunday against the winner of the Buccaneers-Saints divisional matchup.

Green Bay, though, took advantage of a Los Angeles front led by a dinged-up Aaron Donald, who suffered a rib injury in the wild-card round against the Seahawks. Jones, Williams and Dillon combined for 17 carries and 73 yards in the first half, and Rodgers had 169 yards and a TD. The Packers led 19-10 at that point.

The running game then made the difference in the second half. Jones broke a 60-yard run on the first play from scrimmage, which set up his 1-yard touchdown run.

Still, the Rams, managed to hang around and even cut the lead to 25-18.

The Packers took over with 9:46 remaining in the fourth and a one-score lead. That’s when the threat of the run made the biggest difference.

Rodgers hit Allen Lazard for a 58-yard touchdown on a play-action pass where the run action really worked. Rodgers made a beautiful throw, and a wide-open Lazard atoned for a drop earlier in the half.

Also credit Green Bay’s offensive line, which controlled the game even without injured tackle David Bakthiari. Jones (14 carries, 99 yards), Williams (12 carries, 65 yards) and Dillon (six carries, 27 yards) hit the Rams with a fast and physical attack. The Packers finished with 188 rushing yards, and they have averaged 191.5 yards in four home games since December.

The threat of the run will make a difference in the next round, too. In Rodgers’ last three NFC championship appearances — losses to the Seahawks, Falcons and 49ers — Green Bay has averaged 98.6 rushing yards and scored just one TD. Rodgers’ magic act was not enough against stout run defenses, and the Saints or Bucs will present such a challenge. The Packers averaged 96 rushing yards in a split against those teams in the regular season.

Those games were on the road, however. Next weekend’s game will be at Lambeau, where the Green Bay running game has keyed championship runs since Vince Lombardi’s heyday. If the current backs have the same level of success, then Rodgers will be in position to do the rest.

That is the biggest advantage of all for the Packers right now.

The road to Super Bowl truly does run through Lambeau Field.

It’s on the Saints or Buccaneers to go through it.