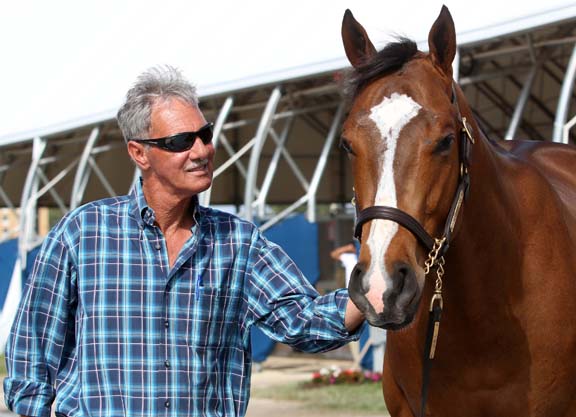 James Layden and Kevin Knuckley, who enjoyed a pinhooking home run with their JK Bloodstock partnership at the OBS March sale, will look to keep the momentum going at next week’s Fasig-Tipton Gulfstream Sale of Selected 2-Year-Olds in Training. Layden takes a three-horse consignment into the South Florida auction, two of whom–a colt by Ghostzapper and a colt by Speightstown–he owns in partnership with Knuckley.

Layden and Knuckley, who are partners on 12 juveniles to pinhook this spring, got off to a quick start in Ocala when an Uncle Lino filly (hip 416) they had purchased for $ 6,500 as a weanling at the 2019 Fasig-Tipton Midlantic December Mixed Sale brought a final bid of $ 200,000 at OBS following a furlong work in :10 flat.

“She was just a good individual, well-balanced and just a nice-looking baby,” Layden said of the filly’s appeal as a weanling. “She just grew up and was the same horse in a bigger size. I knew she could run when she left the farm and I was hoping she would work like she did. She galloped out really big and made a beautiful video. So everything just came together with her. But she’s a good individual and nice horses perform when it’s their time. I am happy with the result, but she was worth it. You don’t have horses like that everyday.”

Layden and Knuckley have been partnering on horses for the past four years and for Knuckley, a native Texan and owner of a Ditch Witch construction equipment dealership, the partnership has been a dream come true for a lifelong racing fan.

“My true passion for racing started at a Class II track called Trinity Meadows in Willow Park, Texas, just west of Fort Worth,” Knuckley recalled. “I was 16 years old and it was just me and my dad going to the track. Naturally, I got to bet illegally and I won a little bit and that really got me hooked. Finally in 1997, Lone Star Park became a reality and we got Class I racing in Texas and I would go out to the track any time I could.”

“We had middling racing success with some of these older claimers,” the son recalled.

One near-miss for the father-son team still resonates years later.

“Dad had a choice,” Knuckley said. “He had to pick between a horse called Scoot the Goose and Charismatic. And he chose Scoot the Goose. He loves to tell that story.”

Scoot the Goose (Fly Till Dawn) would win twice in 12 lifetime starts and earn just over $ 37,000 on the racetrack. Charismatic would win the 1996 GI Kentucky Derby and GI Preakness S.

Knuckley eventually found his way into the pinhooking game with Texas-based trainer Michael Neatherlin and while pinhooking a pair of juveniles with another partner at the 2017 Gulfstream sale, met up with Layden.

“We bonded over those few days and really got to know each other,” Knuckley said. “We shook hands after the sale and we walked out of the parking lot that night and [Fasig-Tipton’s] Terence Collier walked out with us and congratulated James on the sale. It was a really cool moment. I had met James at a couple sales at Keeneland and I didn’t know what his prior success was, but I could tell he was a good horseman.”

The JK Bloodstock pinhooking partnership was born that night in the Gulfstream parking lot.

“We have this system working,” Knuckley said of the partnership. “When I go to sales, I’m not the guy who knows just enough to be dangerous. I know a little more than that. And I’m still dangerous. I would never buy a horse without having a true horseman inspect him and take a look at it. And that’s certainly where James comes in on this deal.”

Knuckley describes himself as the research and numbers side of the operation.

“I am really good on pedigrees,” Knuckley said. “I have really studied the breed pretty intensely. And then I’ll look back at the Auction Edge and I’ll go back and look at True Nicks and I’ll do the nerd work, I guess. Because I’m a numbers guy. I can see some things in the physicals–and it’s great now that they have the videos–but I can look back at the numbers, at the sales figures, I can certainly look at dosage profiles and how the sales are working–whether it be a sire or the family, certain crosses. Not everything can be about the pedigree, but I do know this, the ones that perform outside of their pedigree are clearly the exceptions and not the rules. So I believe in pedigree, I believe in good crosses, I believe in dosage profiles and the grading systems, especially if you look at the stakes results, you can see many of these are As and A+s.”

While Knuckley wasn’t able to attend the Midlantic December sale in 2019, the filly with a light pedigree page impressed Layden, who reported back to his partner.

“James picked out this Uncle Lino filly and it was his first or second crop and he is a Maryland sire who wasn’t getting a lot of recognition at that point–I think he was a $ 4,000 sire,” Knuckley said. “But James said, ‘I really like this filly. I really think she can grow into something.’ And then I looked and I said, ‘She is checking all the boxes on my end, the cross, the dosage. The only thing that wasn’t there was the page. Her page was extremely light, but for $ 6,500, we had a lot of potential. So we were thinking maybe she’ll bring $ 40,000 of $ 50,000.”

Knuckley wasn’t able to watch the filly sell at OBS.

“I was on a flight for a spring break trip with my kids and I knew I was probably going to miss her,” Knuckley said. “James said, ‘I think there is a shot she brings $ 100,000.’ And I said that would be great, that’s a home run. I get off the flight and the text pops up and he said, ‘She brought $ 200,000.’ And I just about flipped. I couldn’t believe it. It’s the biggest home run–as far as a multiple goes–I’ve ever had on a pinhook. I mean 30X. That’s insane.”

JK Bloodstock will offer a pair of colts at the Gulfstream sale, led off by a colt by Ghostzapper (hip 69) who is the first foal out of Alpine Sky (Indian Charlie), a daughter of graded winner Alpine Garden (Lemon Drop Kid).

“He doesn’t have as quick a turn of foot, but he’s a really nice colt,” Layden said of the dark bay. “He’s going to make a nice racehorse later on. He’s kind of a 3-year-old type, it looks like.”

The colt was purchased for $ 130,000 at last year’s Fasig-Tipton Selected Yearling Showcase.

The partnership will also be represented at the Gulfstream sale by a colt by Speightstown (hip 124). Out of Holiday Blues (Ghostzapper), a half-sister to multiple graded placed Wine Police (Speightstown), the juvenile was a $ 90,000 purchase at last year’s Fasig-Tipton October sale.

Layden’s Gulfstream consignment is completed by a son of Mastery (hip 56), who is a half-brother to the speedy Nashville (Speightstown). Layden purchased the colt for $ 80,000 at the Fasig October sale, just a week before Nashville’s record-setting victory in the Perryville S. at Keeneland.

“That’s a good update that we got after we got him,” Layden said of the colt. “And he’s doing really well right now. I look for him to be pretty good, too.”

Of his Gulfstream trio, Layden said, “All three of these are big, strong colts and when you come down with this kind of competition, you’ve got to have something pretty substantial to actually hold up.”

Layden will look for his Gulfstream consignment to continue on from the successful result at OBS.

“There are always high expectations with what we’ve got,” he said. “Because we’ve got some pretty nice horses, I think, all the way through the sales.”

For his part, Knuckley balances his optimism with a healthy dose of realistic expectations.

“I’ve been to that Gulfstream sale and had some success there,” Knuckley said. “And I’ve also had some heartache there. We had two get hurt there and we thought they were going to bring a quarter-million dollars a piece. So, as with any endeavor in this business, you kind of hold your breathe a little bit. Anything can happen, but the two individuals we have there are by proven, prolific sires. Ghostzapper and Speightstown are about as solid as they come.”

As the partnership moves into the second juvenile auction of the year, Knuckley is clearly enjoying the ride.

“We are a small operation,” he said. “James is based in Ehrhardt, South Carolina and I’m back here in Fort Worth, Texas. I’m just an individual owner, I’m not part of a high-powered stable. So for us to hit these kind of home runs, it gives you goose bumps some times. As our little partnership has grown, we’ve been able to take a little more risk and make some larger buys. When you get to check off that bucket list of going to Saratoga two summers ago for the yearling sale there and to be able to go this Gulfstream sale, I just got to tell you, that’s part of the dream. Outside of going to the Derby in this business, it is fulfilling a big part of the dream. And to do it with someone like James Layden, who has taught me a lot and brought me in with this experience, it’s really hard to put into words about how much this means to me. James should get all the credit, he does a lot of the work. I’m extremely proud and honored to be his partner.”