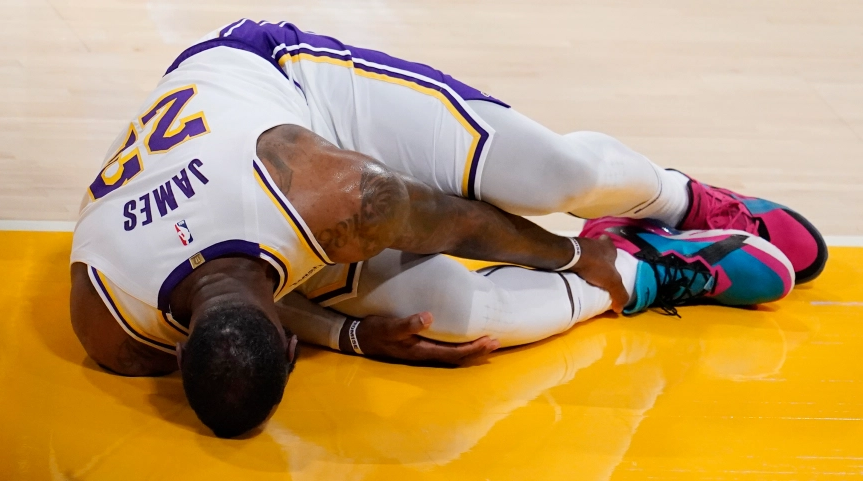 Los Angeles has been playing without All-Star Anthony Davis, but things got even worse when the Lakers’ LeBron James left yesterday’s game early with what has been diagnosed as a high ankle sprain.

Early X-rays came back negative, but a high ankle sprain can take weeks to heal, unlike a normal ankle sprain.

James suffered the injury in the 2nd quarter when the Atlanta Hawks’ Solomon Hill dove into James for a loose ball.

LA ended up losing the game 99-94, but the loss of James ranks much higher.

The Lakers’ Montrezl Harrell was quick to question Hill’s aggressive play saying in his post-game interview, “We really didn’t feel like it was one of those basketball-type plays.”

The Lakers were 3-0 since the All-Star break, and James was in the running once again for this season’s MVP, averaging 25.4 points, 7.9 rebounds, and 7.9 assists a game this season.

Now, odds have to favor Nikola Jokic from the Denver Nuggets, who is pulling in an average of 27 points, 11.2 rebounds, and 8.6 assists per game this season.

Though James has exhibited tremendous health and stamina throughout his career, a high ankle sprain could keep him out as many as 11 or more games.

The team was already looking for a big body to help out in the absence of Davis, eyeing the Cleveland Cavaliers’ Andre Drummond as well as the San Antonio Spurs’ LaMarcus Aldridge, but there’s no replacing James.

Still, James seems confident he will return sooner rather than later.

Nothing angers and saddens me more than not being available to and for my teammates! I’m hurt inside and out right now. 🤦🏾‍♂️. The road back from recovery begins now. Back soon like I never left. #ThekidfromAKRON🤴🏾

The Lakers are back on the hardwood tonight against the Suns in Phoenix.