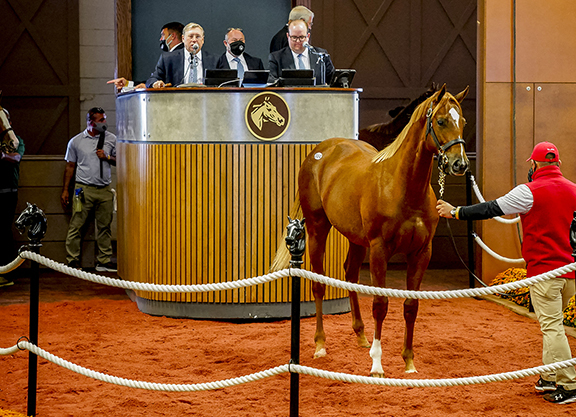 TIMONIUM, MD – The Fasig-Tipton Midlantic Fall Yearlings Sale got underway with an abbreviated session Monday afternoon which opened with an offering of 154 catalogued New York-breds and featured the session’s two six-figure transactions. Just minutes into the action, Vicki and Mike McGowan’s Xtreme Racing Stables purchased the day’s top-priced offering when going to $ 160,000 to acquire a colt from the first crop of Grade I winner Cupid (hip 4). The yearling was consigned by Eaton Sales.

“We put him here because we thought he would be a bigger fish in a smaller pond,” Eaton’s Reiley McDonald said. “I think he was so good physically that he brought as much here as he would have brought anywhere else in the country. When you are in the top 20% of the auction, whether it is this year or any other, you are probably going to do relatively close to the same, except at the very highest levels where you need the principals bidding. So if it’s an agent-driven year, which it has been, we are not going to hit the huge high numbers. At the same time, he was a beautiful colt and a lot of people liked him. He was clean and he sold really well in this market. We’ve never sold here before, so it was a nice experiment and it worked well for us.”

Fasig-Tipton’s Selected Yearlings Showcase in Lexington last month also opened with an offering of New York-breds to compensate for the company’s canceled Saratoga auction. Eaton’s first Midlantic consignment featured 10 Empire-breds and McDonald said the decision to sell in Maryland was based on both geography and timing.

“We thought if we had New York-breds, it would be tougher to sell them in Kentucky, especially leading off the entire yearling season,” McDonald said. “We had two New York-breds who sold at Fasig-Tipton [Showcase] very well, but they were top 10% physicals. Everything else we had came here because we figured it was 3 1/2 hours down the road and maybe they would get more New York traffic, which turned out to be true.”

“I think the market here is limited,” McDonald said. “There is not enough demand to handle the 500-some horses catalogued, but on the whole, in an awful year, it could have been a lot worse. I think it’s been ok and we should all be happy that we’ve been able to trade horses at a time when our world is in a state of–let’s just say–a state of ‘bleep.’”

Pinhookers, who largely found themselves competing with typical end-users on the perceived top offerings at the September yearling sales in Kentucky, were active Monday in Timonium. Among them was David Scanlon, who purchased three lots during the session.

“It’s been a little spotty all year. I still think when you follow the good ones up, ones that you think are going to be pinhook prospects, you’ll find competition,” Scanlon said. “I think there is a strong market for the horses we judge to be fast or early types that we can make good money on. But we don’t have the option not to buy. This is what we do, so we have to have stock.”

Scanlon expects the competition to only increase Tuesday.

“I found Keeneland was hard for the right horse,” Scanlon said. “We got a few bought at Fasig in the New York-breds section and I was really happy with them. But I found the open section was pretty tough to buy a pinhook-type horse. I think here is the same thing. I think momentum will build here tomorrow, so it was nice to jump in early and get a couple.”

Tuesday’s second and final session of the Midlantic sale gets underway at 10 a.m.

Mike and Vicki McGowan’s Xtreme Racing Stables added a colt from the first crop of Grade I winner Cupid to their burgeoning racing stable when trainer Mac Robertson went to $ 160,000 to acquire hip 4 early in Monday’s first session of the Fasig-Tipton Midlantic Fall Yearlings Sale.

“I think when we go to these auctions, the first thing we do is look at the bloodlines,” Mike McGowan said. “We put a list together that looks like a good fit for us, but at the end of the day it comes down to the hands of our trainer Mac Robertson. He’s the one that is out there. He goes through all the horses. And we all thought this horse was a very athletic-looking colt with some really nice lines. He checked out very well, so we are very excited about him.”

Consigned by Eaton Sales, the yearling is out of Gottah Penny (Stravinsky) and is a half-brother to stakes-placed Brokered (Eddington) and Copper Gem (Gemologist). Alan Quartucci signed the ticket to acquire the youngster for $ 52,000 at last year’s Fasig-Tipton New York Mixed Sale.

The McGowans, based in Minnesota, have been involved with racing for about five years now, but which of the couple is responsible for their involvement in the sport is still a subject of debate.

“I would buy every single horse because I love them all,” Vicki McGowan said. “My husband is the one that digs into bloodlines and all of that. He and our trainer Mac Robertson are the ones that try to figure out what is the best one to get.”

Mike McGowan, for his part, said, “My wife really was the one that got into it. I think she has about 12 or 15 horses. We try to differentiate. She usually tries to take the fillies and I take the colts.”

Xtreme Racing Stables was recently represented by first-out Delaware Park maiden winner Sir Wellington (Palace), who was purchased by the operation for $ 55,000 at this year’s Fasig-Tipton Midlantic 2-Year-Olds in Training Sale. From that same auction, the operation acquired a colt by Bayern for $ 80,000. Now named Xtreme Mayhem, the juvenile is training at Delaware and is getting positive early reviews.

“We are probably very skewed to the younger side, we have a lot of 2-year-olds going and we have four or five yearlings right now,” McGowan said. “I think we will continue to grow it as long as we have success with the ones we have.”