Ash Barty, the 2019 French Open champion, was looking for her third quarterfinal appearance at her home slam while the American Shelby Rogers, was hoping to prolong her impressive run by reaching the quarters for the first time.

Rogers, currently ranked #60, is a bit of a giant slayer, having notched notable wins over two former world #1s, Simona Halep, and Serena Williams. Last week at the Yarra Valley Classic, she was just ten points from knocking off the eventual champion and current world #1, Ash Barty. Their first match, won in straights by Barty, was in 2017 at the Australian Open.

Rogers won the toss and elected to receive. Barty, striking an ace up the tee, held easily to 15 for 1-0. Rogers held to love following three unforced errors from her opponent. Barty opened the third game with an ace up the tee and with an exquisite crosscourt backhand lob winner, held to 15 for 2-1. 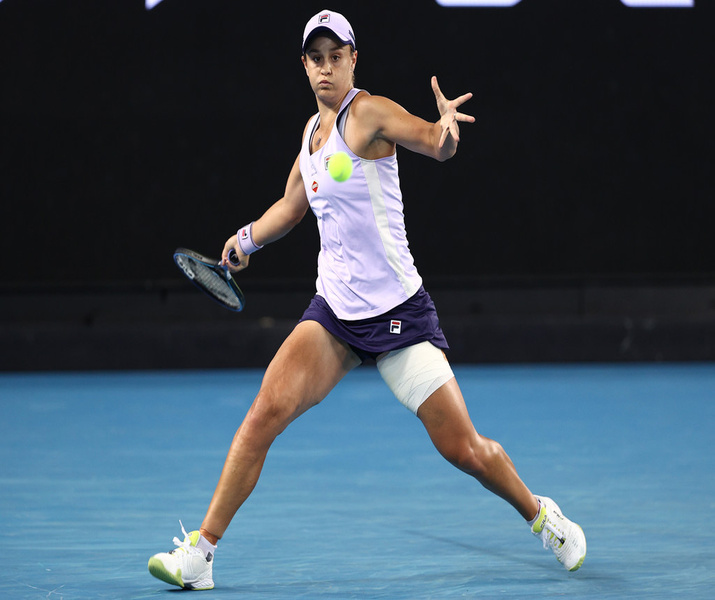 Rogers struck her first ace of the match to save a break point but dropped serve following an incredible rally that included sliced backhands, remarkable defense, and an inside-out forehand winner from Barty to secure the break.

Barty, controlling play from the baseline, consolidated the break for 4-1 with a huge serve up the tee. Rogers, regrouped admirably, striking two consecutive aces, and held to 15 for 2-4.

Barty under pressure in the 7th game, faced two deuce and two break points but held behind her third ace and two fantastic forehands.

Rogers, serving with new balls, kept it close, striking her 4th ace, and held at love for 3-5. The world #1, continued to rip the forehand and clinched the set 6-3 in just twenty-nine minutes.

Rogers managed to save a break point with a spectacular inside-in forehand but dropped serve when she overcooked a forehand. Barty, seamlessly moving from defense to offense and successfully employing the slice backhand, consolidated the break for 3-1 with her fourth ace and an unreturnable on game point.

Rogers, despite making 4/6 first serves, dumped serve again following two outstanding winners off the ground by Barty on consecutive points. After consolidating the break with another ace and an overhead smash for 5-1, it appeared as if the twenty-four-year-old Australian was going to cruise to the quarters, but it soon got a bit complicated.

Rogers continued to go for her shots and it paid dividends. Despite facing two deuce points and donating a double fault, she struck her 5th ace and held for 2-5 with a huge serve up the tee.

Barty served for the match and a quarterfinal berth yet despite earning two match points, could not get it done. She double-faulted on the first and lost the second when Rogers unloaded on a crosscourt backhand. The twenty-eight-year-old American earned a break point when Barty’s crosscourt forehand went wide and converted with an extraordinary inside-in forehand.

Rogers, despite missing 4/6 first serves, swung freely off the ground and behind two well-placed serves on consecutive points, held to 4-5. After 1 hour and ten minutes, Barty once again served for the match and this time, left no room for mistakes as she closed out the game at love.

It was a spectacular performance from the world #1. She hit five aces to 3 double faults and maintained a first serve percentage of seventy. She won a remarkable 76% of first serve and 67% of second serve points and was 3/6 on break points.

Her next opponent is Karolina Muchova of the Czech Republic who took out the 6th seed Karolina Pliskova and the 18th seed Elise Mertens in straight sets to reach her maiden quarterfinal down under. Barty won their only previous encounter and should expect an arduous test from the 25th seed as she is undoubtedly teeming with confidence.