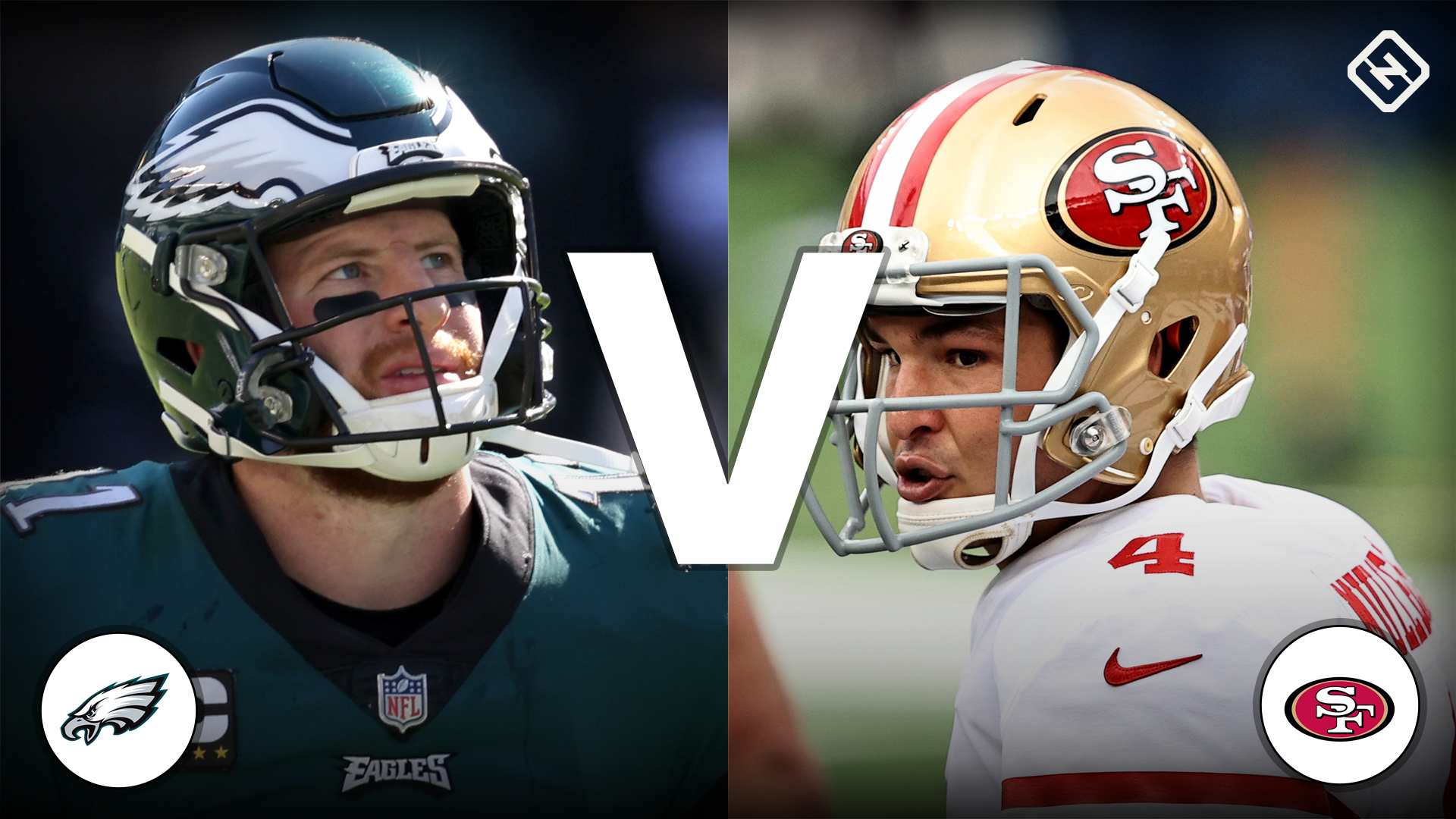 The NFL’s Week 4 “Sunday Night Football” matchup looks like it could become a war of attrition.

The 49ers (2-1) are without Jimmy Garoppolo, Raheem Mostert and Tevin Coleman on offense, as well as Nick Bosa, Richard Sherman, Dre Greenlaw and Solomon Thomas on defense. But they will have both tight end George Kittle and wide receiver Deebo Samuel back in action, which should significantly help backup-turned-starting QB Nick Mullens, who has completed 70.2 percent of his passes for 414 yards, one TD and one interception in two games. San Francisco is a 7-point favorite at home.

The Eagles (0-2-1) are still winless and without a significant number of key contributors: DeSean Jackson, Alshon Jeffery, Jalen Reagor, Dallas Goedert, Andre Dillard and Brandon Brooks on offense, along with Avonte Maddox, Trevor Williams and Vinny Curry on defense. That leaves starting QB Carson Wentz, who has been under a lot of fire for the team’s slow start, with a depleted offense led by Zach Ertz and Greg Ward.

Sporting News is tracking live scoring updates and highlights from 49ers vs. Eagles on “Sunday Night Football.” Follow below for complete results from the NFL Week 4 game.

MORE: How the Eagles can lead the NFC East with a Week 4 win

10:50 p.m. — FUMBLE. Eagles get the ball back as Mullens is stripped by Cre’Von LeBlanc and Malik Jackson recovers at the 49ers 42-yard line..

10:45 p.m. — Wentz is gobbled up in the backfield on third down and Philadelphia has to punt from its own end zone. San Francisco has the ball on its own 45-yard line, 10:44 left in the fourth quarter.

10:26 p.m. — San Francisco is able to put pressure on Wentz and force back-to-back incompletions on second and third down. Jake Elliott hits a 35-yard field goal with 55 seconds left in the third quarter, Eagles trail 14-11.

9:30 p.m. — Oof. A nice San Francisco drive gets into Philadelphia territory but ends as Mullens’ pass is intercepted by Rodney McLeod. Eagles’ ball at their own 27-yard line, 2:40 left to play in the half.

9:15 p.m. — 49ers had a good drive but stalled out. They’re able to flip the field though with a good punt from Mitch Wishnowsky. Eagles have the ball at their own 12-yard line, 11:27 left in the half.

9:01 p.m. — TAKE A BOW, BRANDON AIYUK. San Francisco calls a screen (it’s ruled as a rushing attempt on the backward pass) to the rookie on third down, and he takes it all the way to the house with a picture perfect hurdle into the end zone. That’s going to be on Sports Center. Eagles lead 8-7, 21 seconds left in the opening period.

8:42 p.m. — Not much going for either offense so far. Jerik McKinnon gets a 15 yard gain on third down but it’s still short. Eagles get the ball back at their own 22, 7:54 remaining in the first quarter.

8:36 p.m. — Philladelphia finally gets a drive going, and then Wentz panicks as the pocket collapses, tries to throw it over the middle but it gets tipped and picked off. Play is currently under review.

8:30 p.m. — Not much better from Mullens; he completes one on third down after two errant throws, but it’s short of the first down. That’ll bring it to the first media timeout, Eagles’ ball at their own 28-yard line.

8:27 p.m. — Well, not much going for the Eagles: two short runs, Wentz bounces a pass to Miles Sanders and they go three and out. Let’s see if Nick Mullens can do any better.

All “Sunday Night Football” games in 2020 have the same set start time of 8:20 p.m. ET. There are Sunday night games scheduled for every week of the season except Week 17, though the NFL has the ability to flex a game into a Week 17 SNF window.

While the start times for all “Sunday Night Football” games in 2020 will go unchanged, the teams featured in the time slot can be altered beginning in Week 5.